A. Lange and Sohne Watches at European Watch Co.

(38985) A. Lange & Sohne 712.050 Tourbograph "Pour Le Merite" "F.A. Lange Homage 165th Anniversary," Released in 2010 and limited to only 50 pieces world wide, the first watch ever to include a tourbillon, a fuesee-and-chain, and a rattrapoante chronograph, also the first time Lange created a piece in honey gold - a proprietary alloy with a hardness tougher than platinum, 18k honey gold on a strap with a matching 18k honey gold tan...

Please contact us for pricing. See More Pictures
In Stock

(38558) A. Lange & Sohne 105.027 Saxonia Reference, The 33.9mm Saxonia was one of the original 4 watches released by Lange when restarting the brand in 1994, originally in yellow gold this version in white gold with blue dial was released in 1997 and only remained in the catalog for 5 years, 18k White Gold on a blue alligator strap with an 18k white gold tang buckle, manual wind caliber L941.3, blue dial with diamond shaped white g...

A. Lange and Sohne Datograph Up / Down 18k Rose Gold + Deployment Buckle

(38491) A. Lange & Sohne 820.036E Langematik Perpetual Calendar with Black Dial 36 Diamond Baguette Bezel, this is the only example to ever have shown up with this configuration possibly making it a unique piece, this 820.036 is a early 2000s edition of the Lagematik Perpetual (with the date pusher at 11 o clock) and was likely made by special request by an important A. Lange & Sohne collector, the platinum case is in excellent ori...

This fascinating journey started in Saxony, and its capital Dresden, which was a center of European culture, renowned for its technicians, inventors, art collections, and monumental architecture. Elector Frederick Augustus I (called Augustus the Strong) was a staunch booster of scientific measuring, outstanding craftsmanship, and especially clocks. Two generations of the Saxon Court Clockmaker’s Guild led to the genesis of the Lange watchmaking family tree. 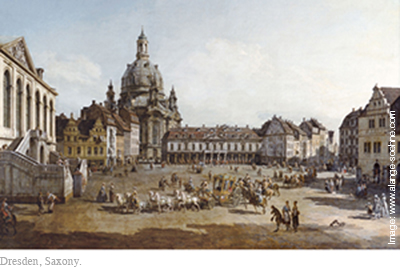 Patriarch Ferdinand Adolph Lange – preferring to be called Adolph – began his life with a most unfortunate family situation and a dubious future. He was born in Dresden on February 18, 1815, to an uncouth gunsmith, Samuel Lange, who physically abused his wife until she ran from him when Adolph was a small child. The lad was frail but quite intelligent, and was given over to foster parents who raised him. Recognizing his potential, they apprenticed him as a fifteen-year-old teenager to the most famous clockmaker to the royal Saxon court, Johann Christian Friedrich Gutkaes. From this master, Adolph, learned that the most important innovations in timekeeping were being developed in France and England. He studied the languages of both countries in night classes at the Dresden technical college, enabling him to take an assistantship in Paris with renowned watchmaker, Josef Thaddäus Winnerl, who had been the brightest student of Abraham-Louis Breguet. Adolph earned the grade of werkemeister in three years and then returned to Dresden and married his mentor’s daughter, Charlotte Gutkaes in 1842. He soon became the partner and principal force in his father-in-law’s workshop.

Adolph was a brilliant visionary, and hadn’t been satisfied with French technology; there was too much trial and error, lacking consistent quality. He had also visited Switzerland and England, where he learned metric conversions and higher standards; he initiated his "Glashütte Project," named after his town in Saxony that was the center of German watchmaking. He mated the Swiss cylinder watch with the more durable and precise English lever movement, an important but relatively expensive innovation that made German watchmaking leap ahead. He opened his own workshop on December 7, 1845, calling it a "manufactory." In an act of entrepreneurial charity, he reinvigorated the poverty-stricken Ore Mountain area South of Dresden by outsourcing the talents of their casemakers, gilders, and engravers for his watches, providing them with educations and jobs. Later, he also promoted them to three other studios, owned by people he had trained. For the next thirty years, Adolph grew his company and gained tremendous prominence in the Glashütte community of clock and watchmakers. 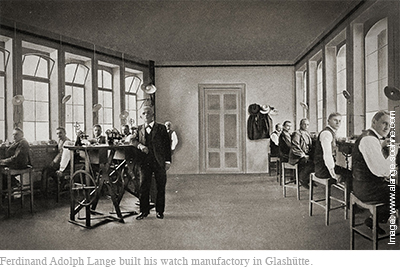 Adolph suddenly died of heart failure in 1875, at the age of 60. He had been mayor of Glashütte for 18 years; a black marble monument was erected to honor his long list of merits. He and Charlotte had two sons – Richard and Emil – both of whom had learned watchmaking from their father. In 1868, before his death, they had become the commercial and technical managers of the company, which Adolph named A. Lange & Sohne. After the United German Empire was formed in 1871, there was an economic boom. During the ensuing affluence, beautifully ornamented and complicated timepieces were in high demand, producing forty years of epic prosperity for the Lange manufactory. Eldest son, Richard, was a technological genius like his father, and spent his life in scientific Horology research, working into his dotage. He designed 27 patents and utility models, creating innovations such as his groundbreaking metal alloy watch balance spring, the first watchmaking company to make their own. Kaiser Wilhelm commissioned Richard’s crowning glory, one of the most magnificent pocket watches of the 19th century, in 1898. It was presented to the Ottoman Sultan during a state visit to Germany.

World War I destroyed the luxury watch market, but the company still survived, making precision marine chronometers for sailors and the German navy. Afterwards, the third generation of the Lange dynasty, brothers Gerhard, Otto, and Rudolf, assumed control of the company up to World War II, keeping alive their reputation for horology excellence. Walter Lange, Adolph’s great-grandson, was born on July 29, 1924, and of course, studied watchmaking until the war began. He was drafted into the army and was severely wounded, returning home in time to see his family’s manufactory nearly destroyed in an Allied bombing raid, just as the ensuing firestorms decimated most of nearby Dresden. The post-war Socialist government expropriated what was left. Escaping to the Western sector to avoid certain brutal labor under the Russians, Walter finally returned to Glashütte forty years later, in 1989, after the German reunification and the end of the Socialist regime.

Walter, the fourth generation of Lange horologists, reinitiated the family business for the second time on December 7, 1990 – exactly (to the day) 145 years after his great-grandfather founded it. Several years later, with a small group of new employees, he introduced a line of four, brilliant new wristwatches. They were immediately successful and created new jobs in Glashütte, reanimating the industry there and making it once again the center of precision German watchmaking, as it remains today.

Walter Lange's first collection of watches stand out as post-war masterpieces. All four models had superb craftsmanship, innovative movements, and the kind of precision and classic beauty that had always defined the company: 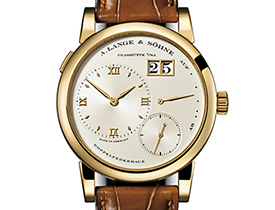 This was the very first watch of the new era. Manually wound, it contained many of the traditional Lange components, such as the German silver three-quarter plate, the magnificent fan-shaped hand-engraved balance cock with the horseshoe-shaped precision whiplash index adjuster, and screwed 14K gold chatons. (101.021)
Image: www.alange-soehne.com 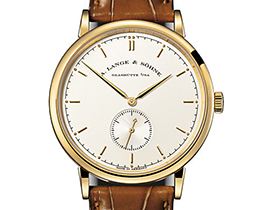 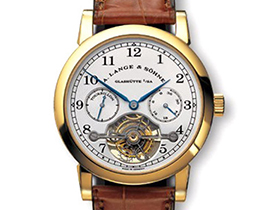 The first manually wound Lange tourbillon after nearly fifty years had a novel going train moved by a new fusee-and-chain transmission. There were only 200 made – 50 in platinum and 150 in 18K gold. (701.001)
Image: www.alange-soehne.com 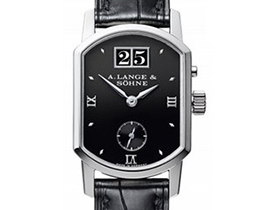 This is an 18K gold ladies watch with a rectangular face and radius corners, manually wound, with a large date window and has become extremely rare. (103.035)
Image: www.chrono24.com

These are the watches that are currently being produced. They are known as some of the finest timepieces in the world and are offered in an array of different variations and complications: 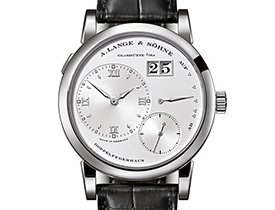 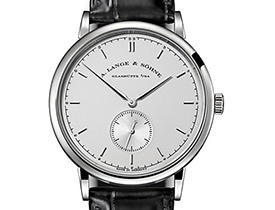 This watch honors the Saxony tradition of craftsmanship inspired by Augustus the Strong, and the technical artistry of Court Clockmaker Johann Gutkaes, mentor, father-in-law, and eventually the partner of Adolph Lange. The dials of this masterwork are legible and clear, and the movements have all the traditional Lange innovations. It's available in 18K white (216.026), pink (216.032), and yellow gold (216.021).
Image: www.alange-soehne.com 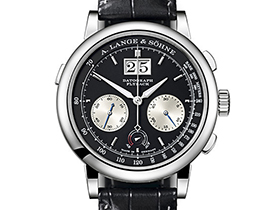 The movement of this platinum watch contains an extremely complex chronograph mechanism with an accurately jumping minute counter, a flyback mechanism, a column wheel control, and Lange's patented oversize date window. The watch was introduced in first in a 39mm case in rose gold (403.032) and platinum (403.035) case and was later enlarged to a 41mm with power reserve indicator, named the "Datograph Up & Down" (405.035).
Image: www.alange-soehne.com 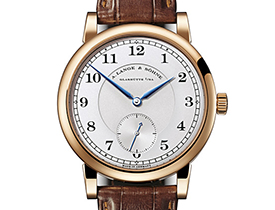 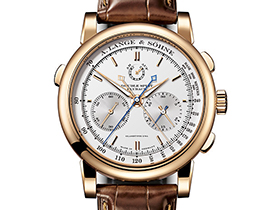 This 18K pink gold rattrapante minute counter is the first mechanical wristwatch to perform comparative time measurements for as long as 30 minutes, making it supremely functional for contemporary uses. Rattrapantes were traditionally limited to 60 seconds. It’s a manually wound, Flyback chronograph with accurately jumping minute counters and a 38 hours power reserve. The watch was Introduced in rose gold (404.032) and in platinum (404.035).
Image: www.alange-soehne.com 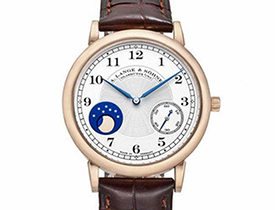 THE "HOMAGE TO F. A. LANGE" EDITIONS 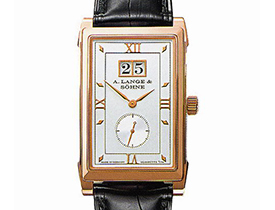 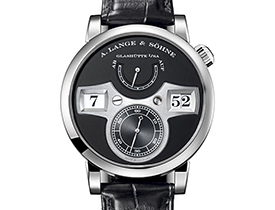 This innovative manually wound watch has an all-mechanical display for hours and minutes, with a new kind of disc design. It has a jumping numbers mechanism, highly legible numerals, and a constant-force escapement to drive the switching steps. The watch was introduced in 18k yellow gold (140.029), white gold (140.029), rose gold (140.032) and platinum (140.025).
Image: www.alange-soehne.com 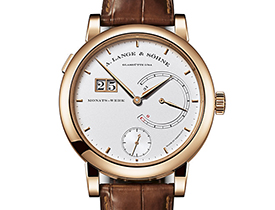 This platinum watch has a patented constant-force escapement and an incredibly formidable power reserve of 31 days, with energy brought to the movement by a winding key and contained in a twin mainspring barrel. The watch was made in platinum (130.025) and in rose gold (130.032).
Image: www.alange-soehne.com 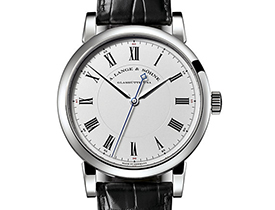 This is an inspiration from the 19th century, an easily legible, precision watch for navigators and purveyors of scientific measurements. The three-complication regulator is reminiscent of the pocket watches by Dresden horologist Johann Heinrich Seyffert, with a stop-seconds indicator, a tourbillon, and a fusée-and-chain transmission for incomparable time measurement, in platinum (232.025), yellow (232.021) or rose gold (232.032).
Image: www.alange-soehne.com 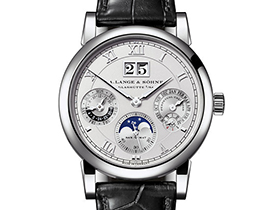 This elaborate, self-winding perpetual calendar watch with moon-phase display, in platinum (310.025) yellow gold (310.021), or rose gold (310.032) has an outsize date that can be advanced both collectively and manually, making it unusually simple to synchronize through the year 2100 and after. It has a zero-reset mechanism and a bidirectional rotor.
Image: www.alange-soehne.com 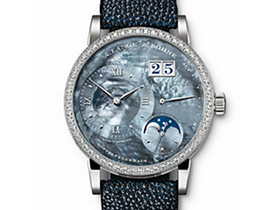 These custom orders are lavishly ornamented with mother-of-pearl faces and quality diamonds. The Little Saxonia, the Cabaret, and the Saxonia Automatic are particularly outstanding
Image: www.padani.co.il