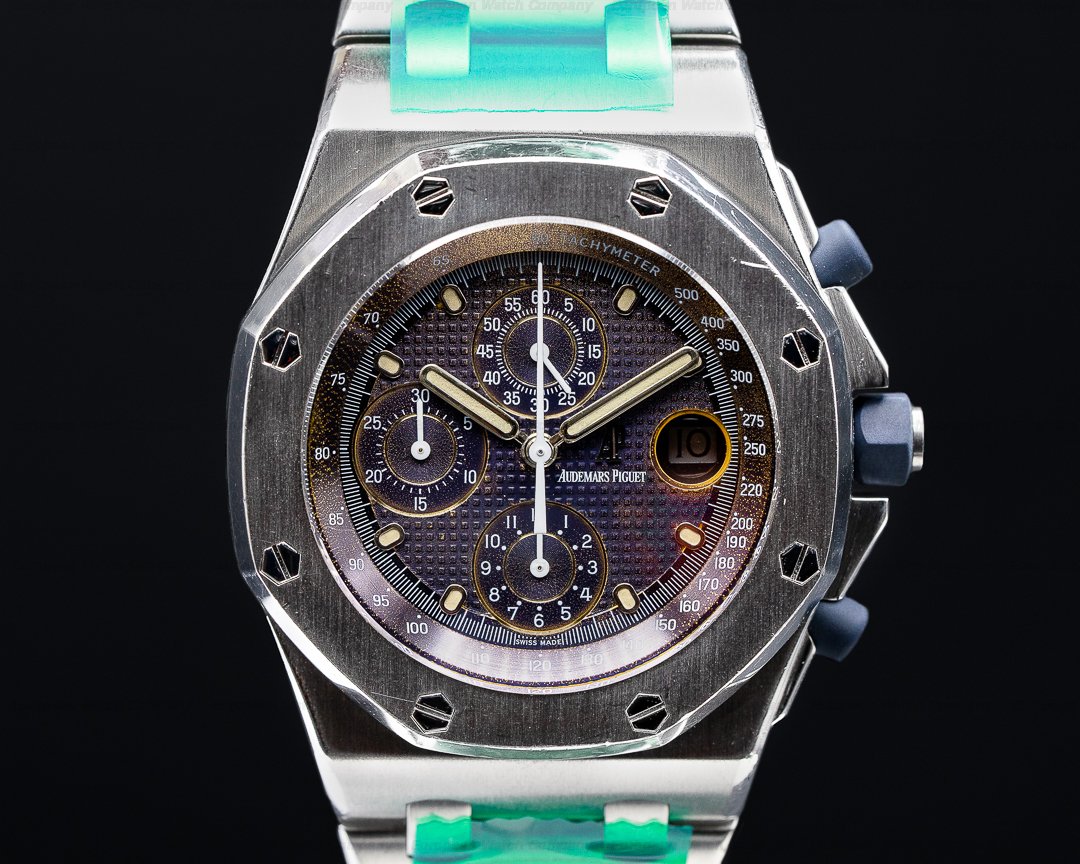 Audemars Piguet 25721ST Royal Oak Offshore Chronograph "The Beast", this is the first generation Royal Oak Offshore released in 1993, stainless steel on an integrated stainless steel bracelet, automatic AP caliber 2226/2840 movement, date window at 3 o'clock, chronograph, small seconds at 12, the original blue dial has turned a vibrant bright tropical brown and has an outstanding look, all original patina on the dial and hands, sapphire crystal, water resistant to 10 atm, diameter: 42mm, thickness: 14mm. Like new with box and extract from the archives showing an original date of sale in October of 1995. The watch is from the earliest coveted D Series of the Royal Oak line D59XXX, This watch was just completely serviced by AP. (36281)

This is a stainless steel Audemars Piguet Royal Oak Offshore Chronograph aka "THE BEAST" 25721ST. It has an integral stainless steel link bracelet with a double folding deployment clasp, and a scratch resistant sapphire crystal. It has round grey "therban" rubber-clad chronograph push buttons, a hexagonal rubber-clad "therban" screw down signed winding crown with crown guards, and there is a solid case back also with a grey therban gasket between the back and the case, secured with 8 screws engraved with "AP – ROYAL OAK – OFFSHORE – AUTOMATIC," and serial numbers. The 42mm diameter octagonal, solid three-body case, screwed, downturned hooded lugs, and beveled flat octagonal bezel with 8 white gold hexagonal face screws, are polished/brushed. There is a grey rubber gasket between the case and the bezel. The dial is dark blue with a "Tapisserie" pattern, with 8 applied steel ringed luminous lozenge hour indices around an outer white minute/one-fifth-second scale, and there is a white perimeter tachymeter chapter to 500 UPH. It includes a magnified circular date aperture window at the 3 o'clock position, and there are three steel ringed recessed blue subsidiary dials with luminous white Arabic numerals, markers, and indicator hands, including a 30-minute chronograph totalizer at 9 o'clock, a 12-hour totalizer at 6 o'clock, and there is a constant running small seconds register at 12 o'clock. It includes rounded gold baton hands with luminous Tritium fill, and a white luminous center sweep chronograph hand. It's water resistant to 100 meters/330 feet, it has a 45–hour power reserve at full winding, and the 14.05mm thick case, dial, and movement are all signed. This Audemars Piguet Royal Oak Offshore Chronograph aka "THE BEAST" 25721ST has a mechanical automatic self-winding Audemars Piguet caliber 2126/2840 (base Jaeger-LeCoultre caliber 889) chronograph movement with a Dubois Depraz chronograph module. It's rhodium plated with Cotes de Geneve embellishment, and it's constructed with 33 jewels, blued screws, and an anti-shock system. It includes a straight-line lever escapement, a monometallic balance that's adjusted to heat, cold, and 5 positions, and a self-compensating flat balance spring. It's anti-magnetic, and the mechanism oscillates at a frequency of 21,600 vph (3 Hz). The Audemars Piguet Royal Oak Offshore Chronograph aka "THE BEAST" 25721ST is the first generation Royal Oak Offshore released in 1993, in a limited edition of 500 examples, and there were only 1,250 pieces made in the D series. It was designed by Emmanuel Gueit, and it debuted at BaselWorld in 1993. 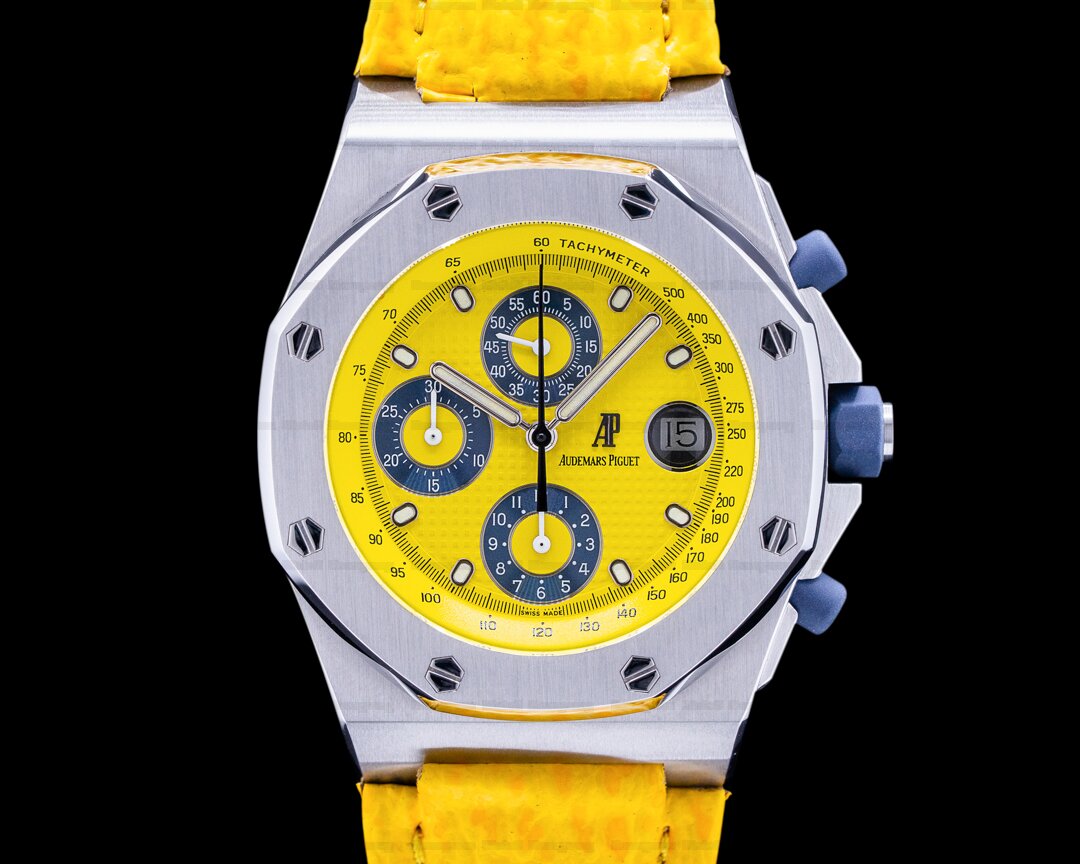 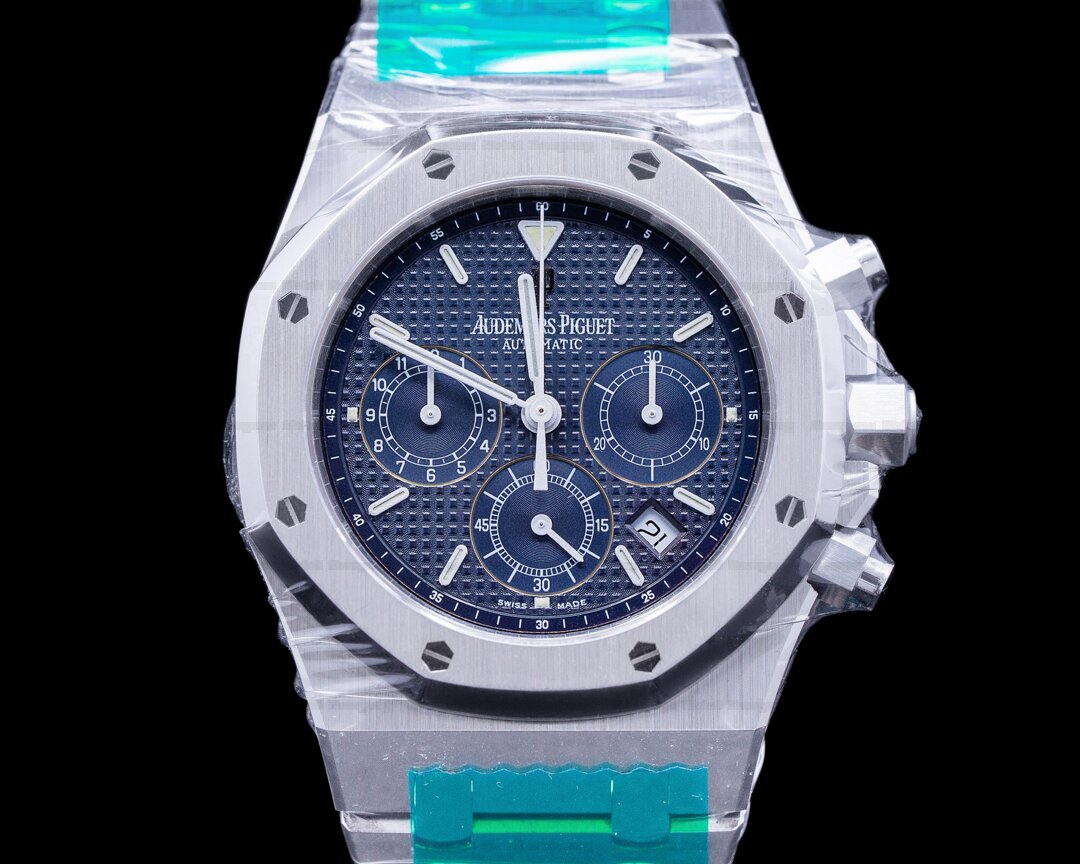 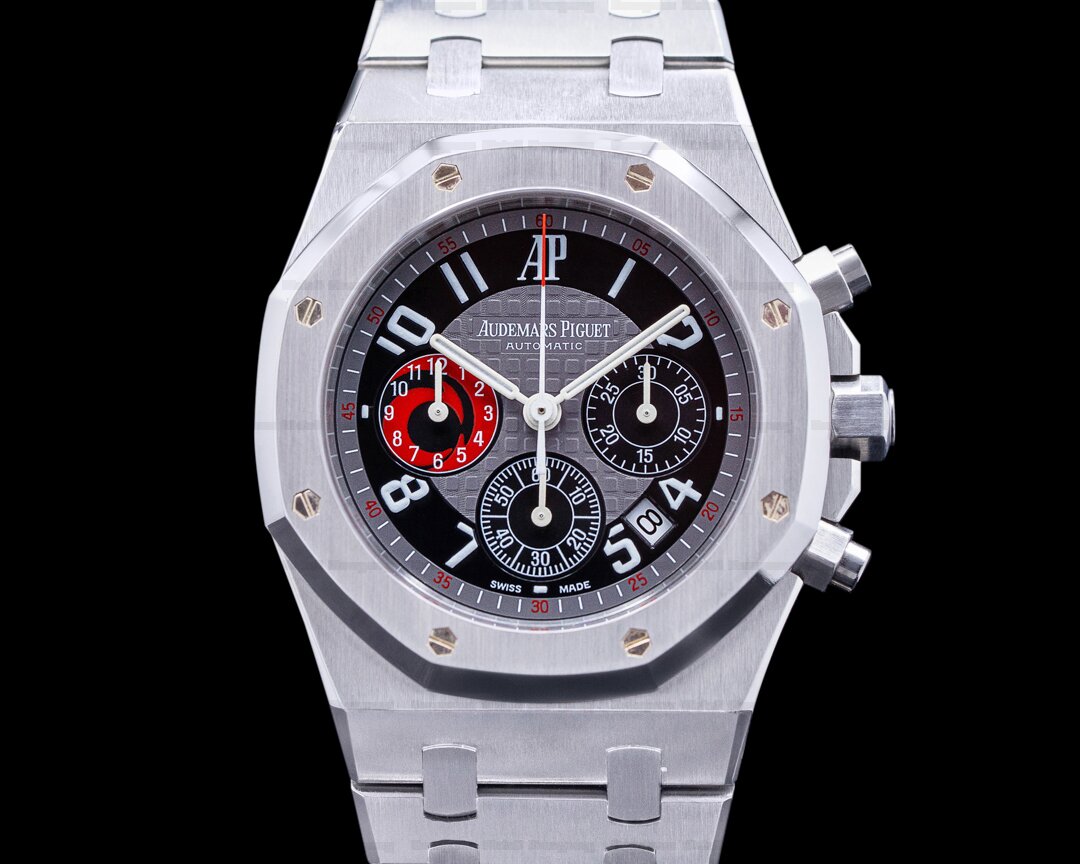 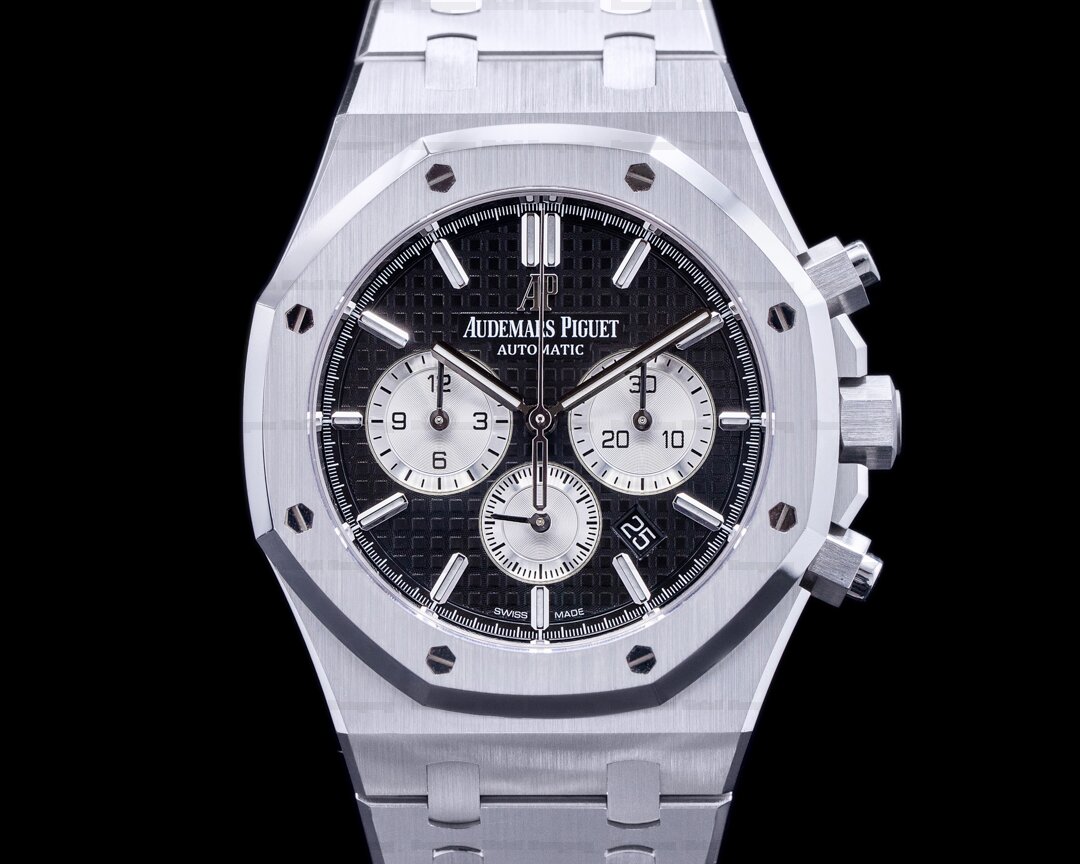 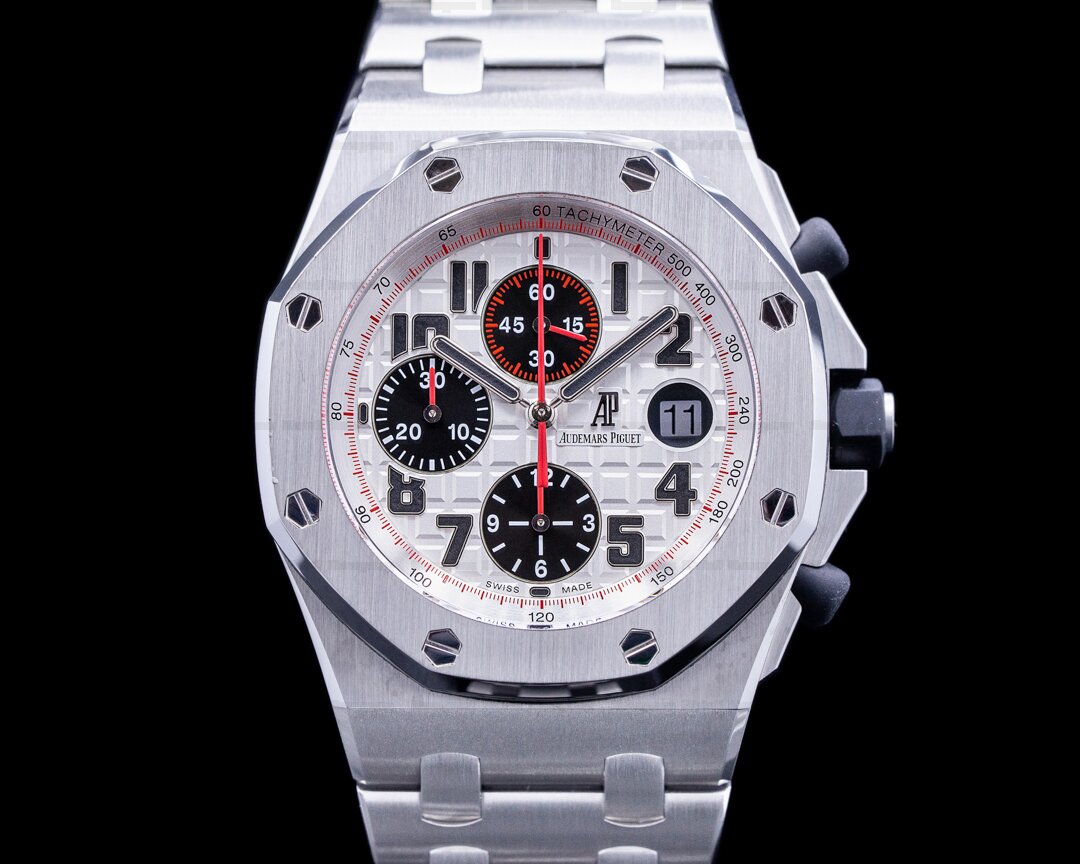 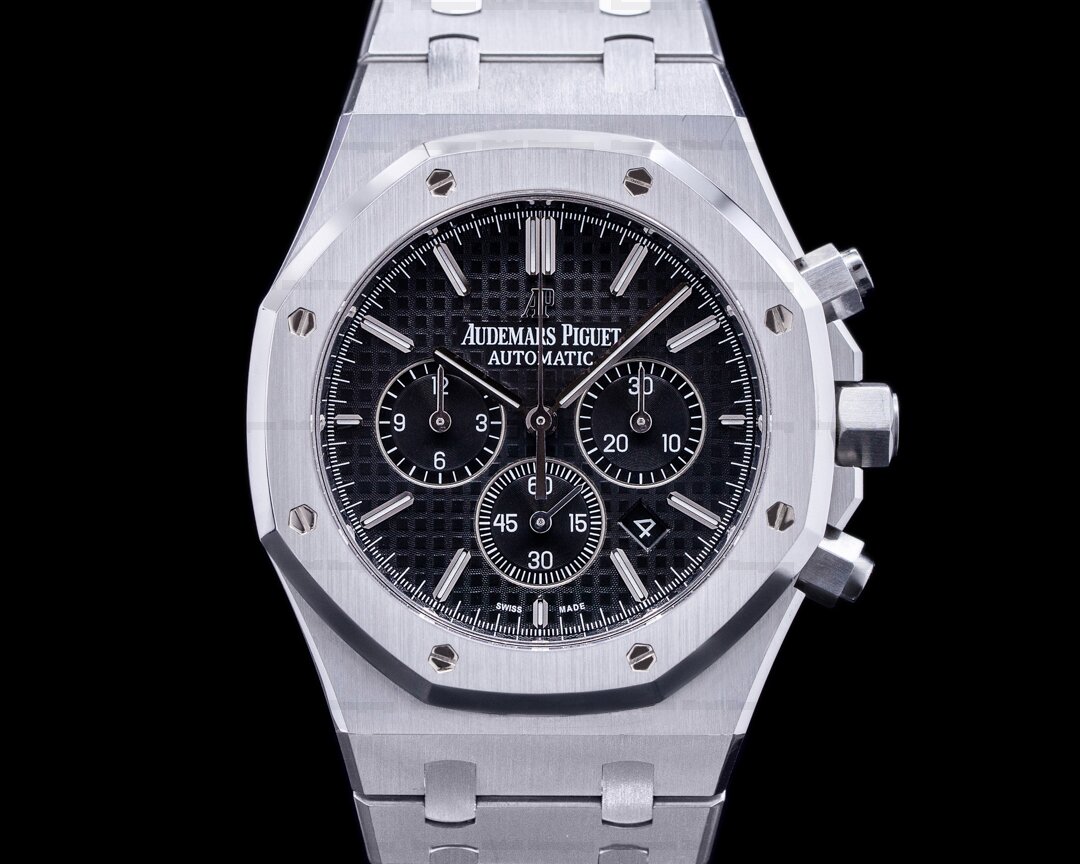 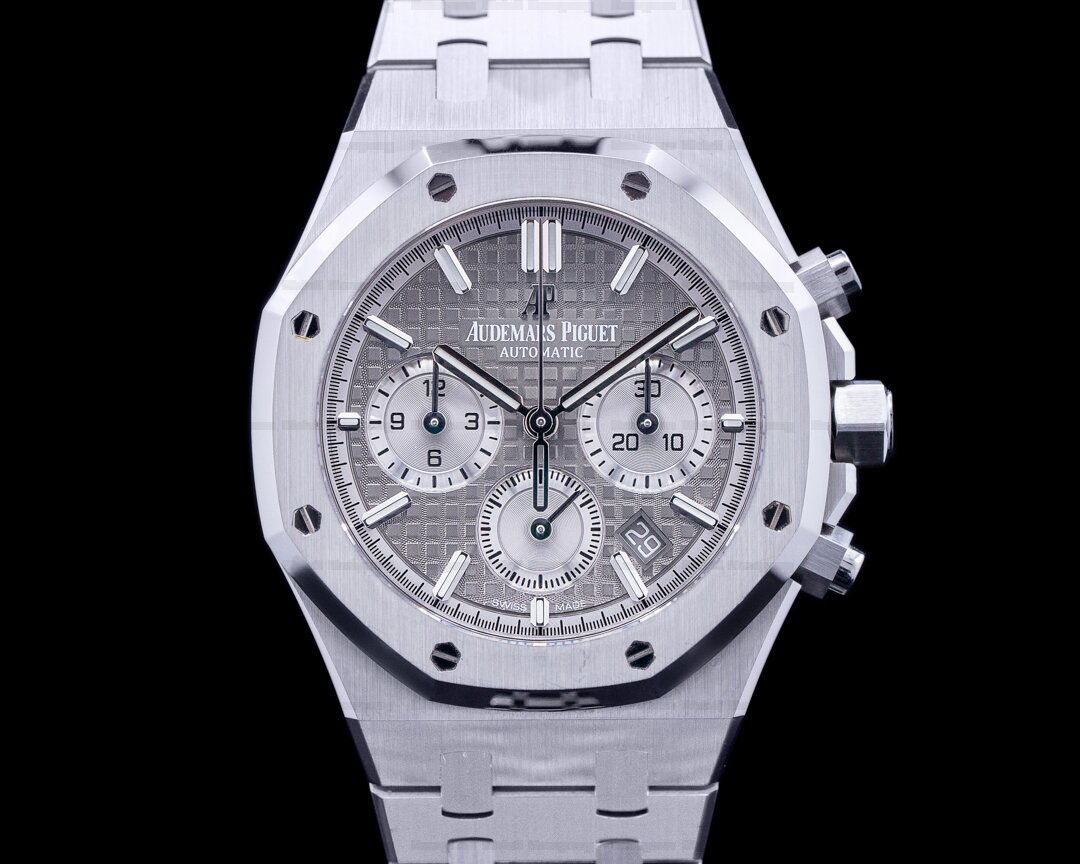 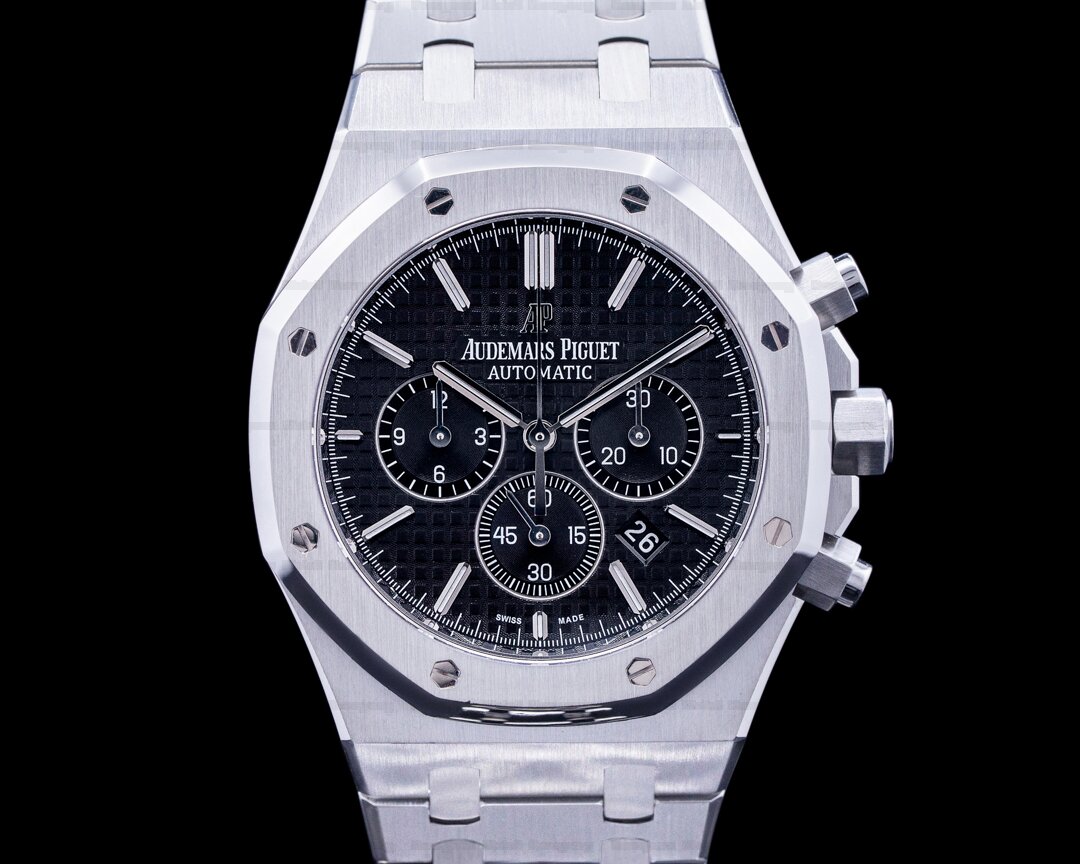 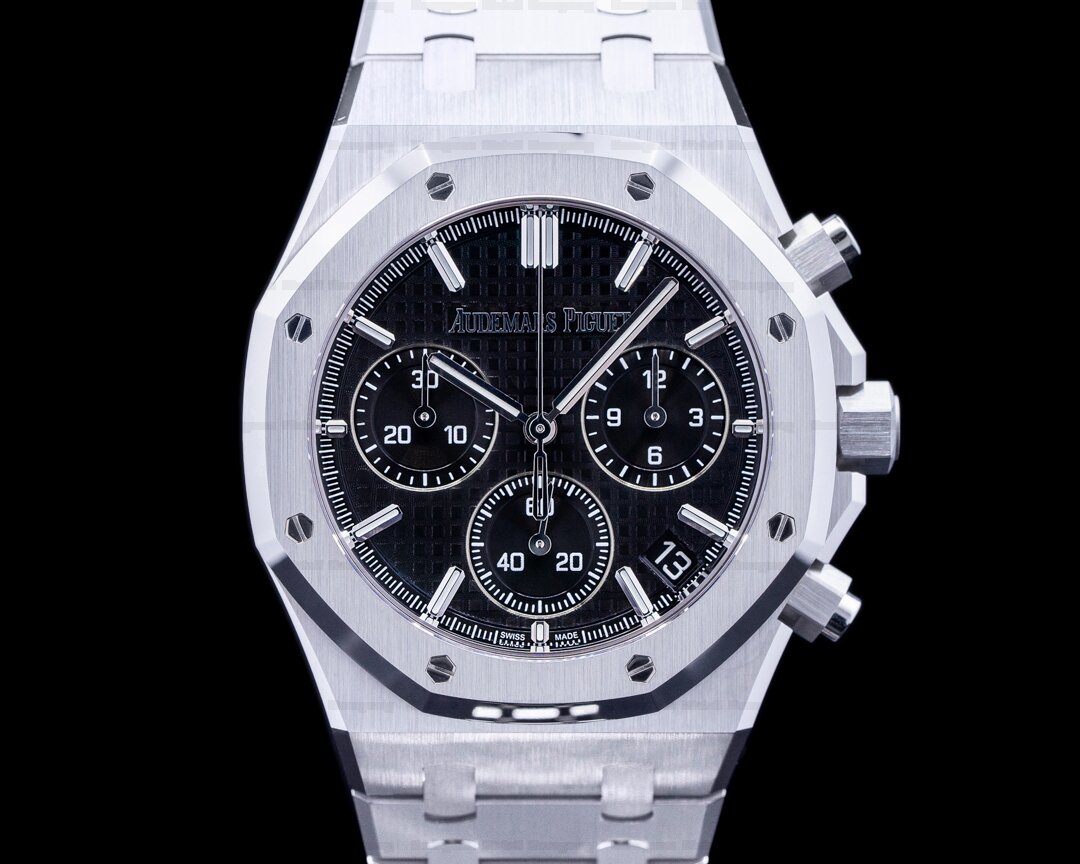